The Magic of Damascus 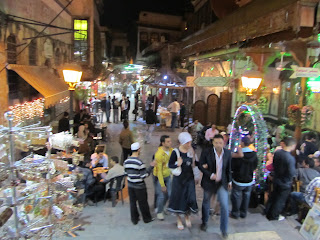 Leaving Beirut was bitter sweet for me as leaving always is however, after about 10 days in the country, I had a strong feeling it was time to move on. So with my bag strapped to the roof of a Mercedes Benz minivan and a car full of Syrian men watching belly dancing on the built-in TV on the dashboard, I crossed the border from Lebanon into Syria. (naturally, not without a bit of drama that extended the travel time 3 hours later than I anticipated). I finally arrived in Damascus at around 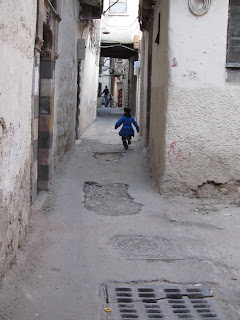 8:00 pm and from the first moment I stepped out of the taxi I fell in love with this city.  As I maneuvered my way through the narrow, old cobblestone streets to find my hostel, I saw small cafes on the sidewalks full of people, vendors on the street corners selling traditional Syrian delicacies, the smell of sweet cinnamon bread, apple tobacco and floral jasmine filled the air and the sound of the evening azan (prayer) echoed from the mosque while Arabic-pop music blasted from the opposite side.  Suddenly I felt alive, I could feel the energy and excitement in the air…this was the Middle East I had been waiting for. 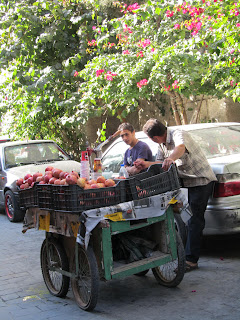 In the mist of my excitement, I had totally lost my way and had no idea where my hostel was. Before I even had a chance to ask, a local came up to me and asked, “Are you lost?” (in Arabic which I decoded from the tone of his voice) and then proceeded to walk me to the door of my hostel and said warmly, “Ahlan, Wa Sahlan…Welcome to Syria.”

After I dropped my bags off and got settled in, I met up with some other travelers who I had met in Beirut. We walked around the corner and sat at a café outside on the sidewalk and had a delicious traditional Syrian dinner. I watched as teenagers sat together and told jokes while laughing loudly, children played in the streets and teased the local street cats, a group of men competed in an 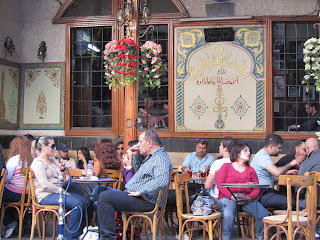 intense game of bat gammon and everyone else just sat around drinking shai (tea) and smoking A LOT of shisha (Arabic for hookah. By the way, why do we call it hookah if that’s not what it’s called anywhere in the Middle East?). Seeing all of this, I just knew Damascus is where I needed to be.

The next day I got up and walked to the old city. Weaving through the small alleyways and souqs (bazaars/markets) with ancient buildings and architecture felt as if I had been transported back in time. Cars are not permitted in the streets of the old city and there are 7 gates (babs) in which to enter the wa 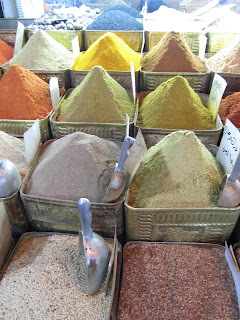 lled city through; you can feel that this is the oldest continuously inhabited city in the world and also why it has been named the city of jasmine and cats. I walked through the vegetable market and saw the hustle and bustle of all the vendors selling their fresh fruits and vegetables to women in traditional hijabs, then past the old citadel into to the spice market where the smell of spices such as cardamom, fennel, thyme, sage and saffron filled the air, onto the food stands selling fresh squeezed pomegranate juice, warm baked bread, boiled kidney beans with cumin and spices ice cream with pistachios on top, and finally passed by the small stores with old silver jewelry, evil eyes and colorful scarves (well I guess it would be a lie to say I passed them) as 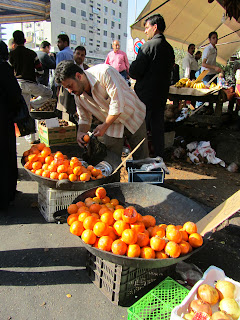 people would invite me into their shops for tea or simply just say “Ahlan wa sahlan.”  There was something magical in the air with a hint of mystery; every corner I turned, I had no idea what I would run into or encounter. As I wondered through the maze of alleys, I thought about the number of events, civilizations and groups of people that have come through here; this really is a city of the past that has uniquely transported itself into the present. On this day, for the first time since I had left home, I felt that high of traveling…the excitement of being in a place that is so very different yet oddly has a feeling of familiarity and warmth that is so comforting. 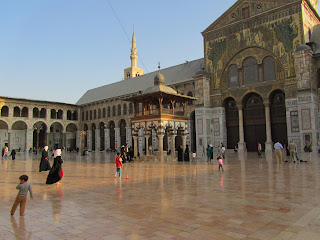 As the sun was setting, I made my way to the Umayyad mosque in the center of the old city. I covered myself in a cloak and headscarf, put my sandals in my bag then walked into the courtyard and just stood there breathless. Beautiful gold and green mosaics covered the walls of the open-air courtyard with roman style arches surrounding it. Children ran around playing tag while teaching their younger siblings how to crawl and families sat on the courtyard floor for a picnic 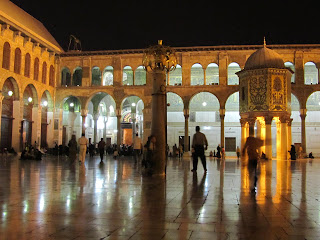 dinner while others prayed inside the mosque. I loved the casual nature of this place of worship and people appeared to be light and content. I really could have sat their all night watching people go in and out of the mosque and bond with their families just to soak up what life is like in Damascus beyond the souks and cafes.

That evening I met up with some of my friends for dinner at a traditional Syrian restaurant. We ducked through a small low doorway, into what looked like an abandoned alley and then suddenly entered this beautiful, bright, large courtyard restaurant.  The restaurant was full with tables of big Syrian families coming together for a 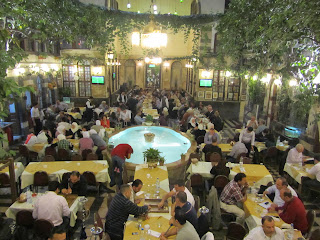 Saturday night dinner. During our meal there was a live oud (a Middle Eastern classical instrument similar to a guitar) performer playing lively, popular Arabic music. Although no one danced, all the Syrians sang along and clapped loudly, embracing the music and night. I could see that even though peoples’ lives were difficult here they have a love for life and really take joy in things such as being together. After dinner, we walked through the old town into the Christian neighborhood and entered into another low doorway which happened to be a salsa club (yes salsa music in the middle of Damascus…totally random, you never know what this city has in store for you). When we left the club at 2 am, there were still people on the streets shopping,  smoking shisha or just chatting. 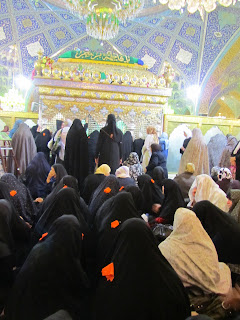 The following day, I continued my exploration of the city and visited a Shiite mosque on the other end of the old city built by the Iranians. This mosque is an important pilgrimage site for many Iranians and holds the casket of a young martyr who was a descendent of Mohammed. Even from the outside, this mosque had a very different vibe and energy then the Umayyad mosque I visited the day before. All the women were dressed in black from head to toe and pushed and shoved to make their way to the entrance. As I followed the crowd, I saw the inside of the mosque adorned with thousands of mirrors, beautiful chandeliers, and Persian carpets spread all across the mosque floor. I sat in a corner among the sea of woman praying and observed, hoping no one would notice my presence and I could just blend in with the others. I watched as the women wept loudly in front of the casket of the little girl with tears streaming down their face occasionally letting out gut-wrenching wails indicating their grief for the loss of this martyr.  As I took this all in, I felt so heavy, completely opposite of my experience in the mosque the previous day. I was also a bit confused and although I knew a bit about the Iranian dramatic grieving process, these customs and formalities all felt so foreign to me 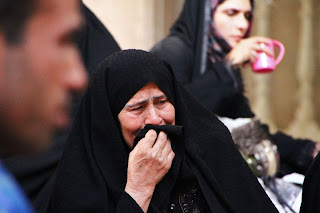 which was hard to reconcile given I so strongly identify with my Iranian heritage. Though I speak the same language as the people in the mosque and have a similar cultural background, I felt like a complete outsider. I realized how many differences and nuances exist even within my own culture that I am not even aware of until I step outside of my environment.

I left the mosque feeling heavy and a little drained and stopped on my way out to buy an evil eye charm from an old woman selling them outside of the mosque. I walked further and was stopped by some street kids asking for money and I glanced over and saw their mother holding a child with a disturbing head deformity. As my day progressed, I thought of the array of experiences I had and all the contrasts from the charm of this city to the 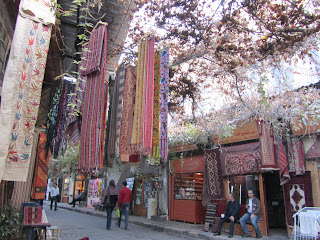 intensity of the mosque and the poverty in the streets. As I was starting to get all wrapped up in my head, I heard someone say, “Where are you from?” I responded America and the man said, “But you look like a Syrian. Where are your parents from?” I explained that they are Iranian. The man then smiled and said “American and Iranian, all are welcome in Syria! Would you like a cup of tea?”

This is the thing about Syria, the moment you start to get sad or homesick, there is someone there inviting you in or wanting to talk with you. As much as I describe the sites, sounds and smells, the real essence of Damascus lies in the genuine kindness, warmth, hospitality and generosity of the people. I 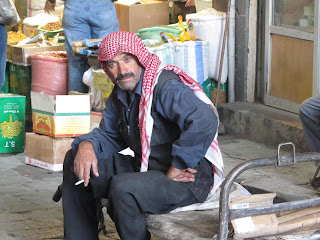 have had so many touching experiences with people watching out for me, telling me how to get somewhere or insisting on buying me something. People are truly interested in learning about your life and where you are from. An enormous smile appears on their faces when you tell them how much you love Syria which they often respond to by saying “Tell people in America that Syria is not what they think it is.” So despite the state department travel warnings, this is my attempt to keep my promise to the Syrian people and present a different side to this beautifully rich country which I hope everyone has the opportunity to visit at some point in their life.

5 thoughts on “The Magic of Damascus”