Tanzania: This is Africa 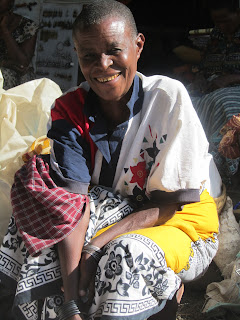 Tanzania is the quintessential Africa. Everything I ever thought Africa would look, taste, smell, and feel like is Tanzania.

After spending some time in Zanzibar, I took a boat back to the mainland and then a bus north through the countryside of Tanzania finally arriving in Arusha, the city my sister Jessica was doing her graduate school internship in. Jess showed me around and also took me to the early education center she worked in located in a small run-down neighborhood on the outskirts of the 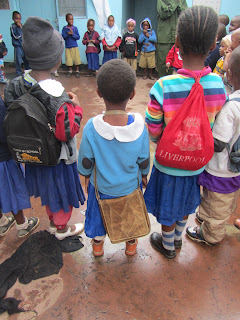 city. After visiting the ex-pat or tourist hang outs, it was so insightful to actually go to a local neighborhood and see the disparity between their lifestyles and that of westerners living in Arusha.

After a week in Arusha, we set out for a safari to the nature reserve of Ngoro Ngoro. From the window of our open-air jeep, we watched as the countryside grew greener and greener. As we approached the reserve, we parked our jeep overlooking the crater and watched the gathering of all the different animal species. Ngoro Ngoro has been hailed as one of the greatest animal migrations of all time and I definitely saw why. 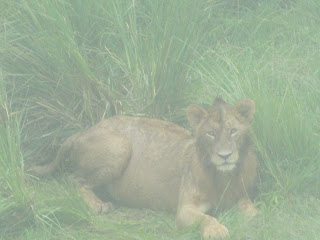 It was incredible; Jess and I suddenly turned to each other and started singing the Circle of Life from the Lion King. Yes, cheesy but we had to do it.

We drove down into the crater and were feet away from zebras, wildebeests, buffalos, gazelles and many other animals grazing the land together.  We ate lunch 20 feet away from a sleeping lion which ironically didn’t jolt us until a hawk grabbed the sandwich 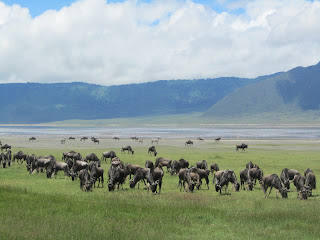 I was enjoying out of my hand and flew away with it. The pinnacle of the safari for me was seeing 3 African elephants gracefully walking towards our jeep in a perfect symmetrical line; I almost lost my breath.

After our day in the crater, we headed off to stay in a local Maasai village.  During the few weeks I had spent in Tanzania I learned a bit about how the Maasai tribes have been impacted by tourism. Many have lost their land, which has also meant forgoing some of 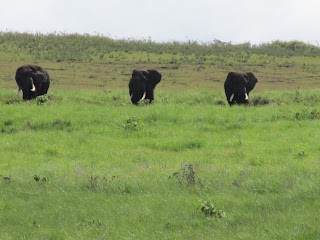 their traditional lifestyles, due to the land being commodified by the government and private entities for safaris. To combat this, many Maasai villages have started cultural tourism programs to bring money back into their communities but have encountered one slight problem: Most typical tourist don’t want to stay in a bare bones Maasai village. They will struggle to climb up Kilimanjaro, often risking their health, but staying in a village for more than a few hours is usually out of the question. Though the Maasai have been a draw for tourist for 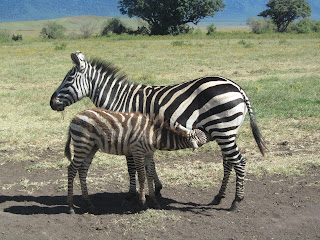 many years now, particularly because their warrior and preserved semi-nomadic lifestyle is regarded as the ultimate symbol of East African culture, this reputation has also left them vulnerable to exploitation and is precisely why tourists usually get a superficial interaction with the Maasai.

Knowing this, Jessica and I struggled with the idea of staying in a village, wondering if we are objectifying or supporting the Maasai people and finally agreed that it was a little of 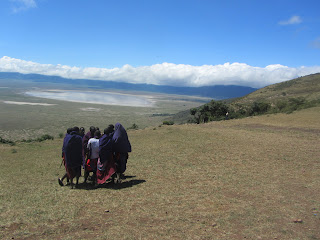 both. Like everything else, we realized it is a complex issue with benefits and consequences on both sides and finally decided to do it with the caveat that a majority of our money would go directly to the people of the village.

It was dark when we finally we arrived at the Massai village after our safari. We entered a small Boma hut constructed of cow dung and wood while we waited to be shown to our beds. Though it was pitch black inside the hut I suddenly proclaimed, 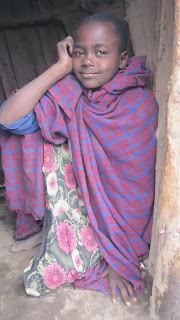 “I think there is an animal in here.” I turned my head, shining the light from my REI headlamp in the corner, and there I saw a baby cow tied up with a goat sleeping at its feet.  When I asked why the cow was inside the house the response was, “This cow is a marriage deposit for that girl. The groom’s family gave it to them to ensure their daughter’s hand in marriage and they don’t want it to get stolen so they keep it indoors at night.” I looked over to see an 11-year old girl cooking quietly in the corner preparing us a cup of hot spicy tea.

That was my first introduction into how much Maasai life differs from mainstream Tanzanian culture particularly because their economy is based almost entirely around cattle livestock. For centuries, cattle 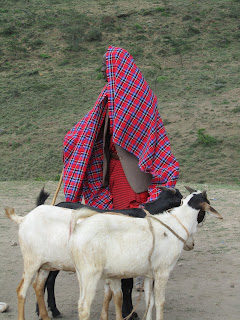 have been the sole measure of wealth for the Maasai and unlike the other 26 modernized tribes in Tanzania, not much of the Maasai’s traditional customs have changed today. For men, the more cows they have, the more wives they can marry, which also translates into their level of prosperity.  Along with polygamy being the norm, female circumcision is still preformed on women and the Maasai have been slow to take up formal education.

Once we finished our tea, we were shown to our own Boma hut where we slept on a slab of cow skin stretched out and held in place by 4 wooden sticks. The next morning, we walked around the village set on a green mountainous hillside, meeting many different people from 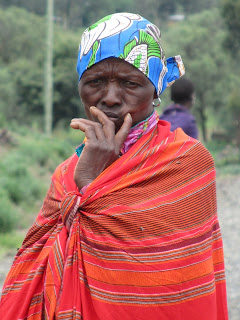 We visited an elder midwife who, with the help of our Maasai guide serving as a translator, told us about the birthing process and how she has delivered over 100 babies in her lifetime. She shared her thoughts on the status of women in the village and in Maasai culture all while re-plastering her hut with the cow dung and water mixture. 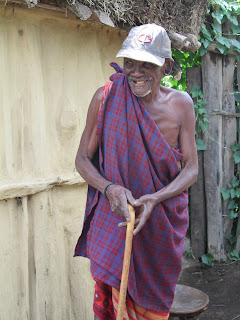 We met an 80-year old Maasai man, enthusiastic about sharing his culture and experiences with us particularly because we are foreigners. He boasted about his victory killing a lion with his warrior stick and bare hands, a highly regarded accomplishment in the Maasai culture. He then told us about his 9 wives and 72 children, the youngest of which is 3 years old. When we asked him why he needed or wanted so many wives his response was, “I’m a rich man so I can afford to support 9 women and all my children. I have 300 cows so each child will get about 4 cows to their name.” 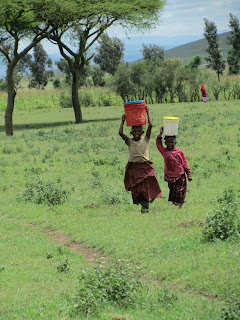 We continued on and took a walk through one of the beautiful hills of the village watching the cows and goats graze the land. We interacted with children who told us about their daily tasks tending to their land and herding animals. As we made our way down the hill we saw one woman after another emerging from an underground tunnel with pounds of cement on their heads. As we got closer we discovered that the 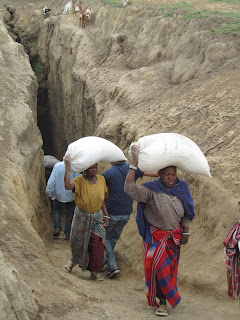 women were moving pounds of cement from underground to the main road to sell.  They did this over and over again all day long while the men “organized” the women, basically telling them where to go and what to do. In Africa, similar to the rest of the world, women bear the brunt of the work. Not only are they responsible for child rearing, cooking and cleaning but they also do much of the physical labor. A harsh reality to accept that slaps me in the face each and every time I witness it.

The last stop on our adventure was the 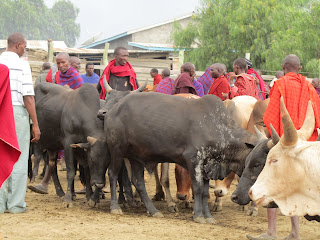 Maasai market. While in route, I was expecting a market selling traditional beading and other tourist handicrafts but once I arrived I felt as if I was transported back 100 years in time. We entered the market and I quickly realized it was a livestock market; one side was designated for trading goats and sheep while the other side was for cattle.  Over 50,000 animals a day are sold or traded here. A goat goes for $50-$60 US dollars, a cow a little over $100.

I was completely mesmerized, as I had never seen anything like this in my life. Livestock was 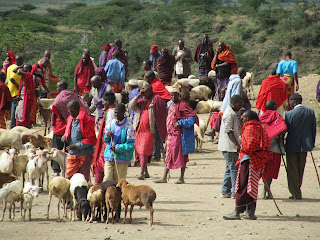 actually used as currency.  I looked ahead of me and saw a sea of men wrapped in brightly colored shukas  (traditional fabric of the Maasai) wearing sandals made out of tire while the women sat in a row on the opposite side selling vegetables and spices, their faces adorned with bright colored jewelry and beaded earrings stretching out their earlobes. It was one of those moments I wished 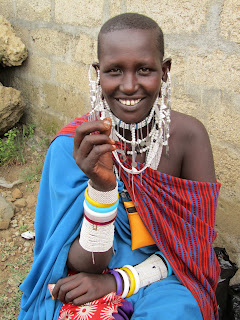 I could be invisible and just sit there for hours watching the chaos go by.  The whole time I was in awe at how the Maasai continue to resist modernization and how little their traditions and lifestyles have changed in the last few centuries.

Our weekend ended and I thought about my experiences in Tanzania: the crater, the Maasai village, the children in the 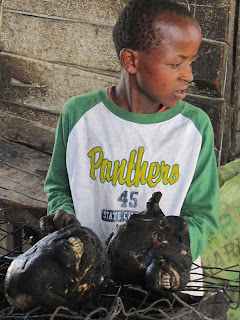 neighborhoods of Arusha and was left wondering why I felt so drawn to Africa. Why I had chosen to come back to the same continent where I had first began my international experiences almost ten years before. Africa doesn’t embody the sophistication of the Middle East, the booming economy of India, or the luxury of South East Asia but I loved it exactly for those reasons. In Africa, nothing is clean and separate. You see the goat they are serving on the table being slaughtered moments before you eat it, everything is chaotic and crowded, you are perpetually 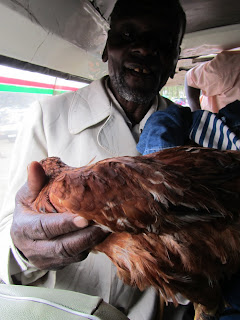 conflicted about your western identity and privilege, people yell at you in the streets even though you don’t understand a word they are saying, you get squeezed into a minibus meant for 10 people with 40 people hanging on it while a woman hands you her chicken so she can get her goat on board. You never know what is going to come your way. Yet that is the beauty, soul and life of Africa and why nothing in the world quite compares to it.

3 thoughts on “Tanzania: This is Africa”