After almost 3 weeks in the Syria and many highs and lows, I woke up with a strong feeling that it was time to move on to the next destination.  As I boarded my plane to Jordan, I knew I was leaving behind people in Syria who I had grown so close with to reenter a life of bona fide solo travel; a simultaneously thrilling and nerve-racking feeling. 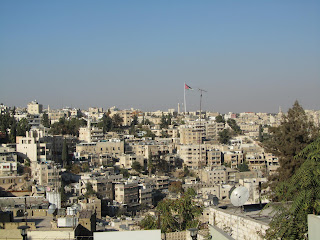 I arrived in Amman, the capital city of Jordan, and realized how surprisingly calm I was about landing in a new place alone as opposed to other times I was in unfamiliar territory. I strolled around, asked a few questions, gathered my baggage and even took the local bus into the city instead of a taxi. Suddenly, after only one full month of being abroad, I felt not only like a well-versed traveler but also felt the excitement of arriving in a place where no one knows me or anything about me but I am just there, with a blank slate, to fully embrace any experience that comes my way.

Along with some of the most incredible sites I have ever seen, the people of Jordan greeted me with such warmness and hospitality. To share every detail would be overwhelming but below are some highlights of my time in this truly rich and beautiful country.

Instead of taking the typical tour, I decided to travel on my own for a day 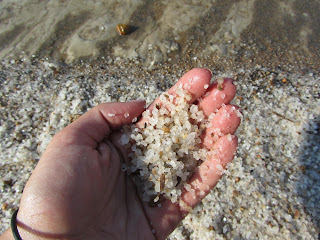 trip to the Dead Sea. I took a taxi to the bus station and then road a local bus to another town, switched to a taxi again and finally arrived at the beach. It was a beautiful, warm day and I floated in the Dead Sea (the lowest point on earth with a higher content of salt than any other body of water) covered myself in black mud from the sea and of course, snuck in a bit of tanning!

As dusk was setting in, 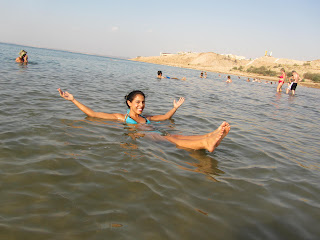 I asked how to get back to Amman and was told to just wait for a taxi on the road that will take me to the nearest town and then take the bus back into Amman. With a bit of hesitation, I crossed the street and waited for about 10 minutes, watching the pastel colored sunset and many cars go by without stopping. Just as my fear of being stranded was starting to set in, a taxi finally stopped and I happily jumped in with several other passengers. I asked to be dropped off at the nearest city and en route, discovered the taxi was headed to Amman and the driver offered to take me all the way to my hostel. I debated in my head for a moment if it actually was a good idea to ride with 4 strangers in a car yet was surprised that 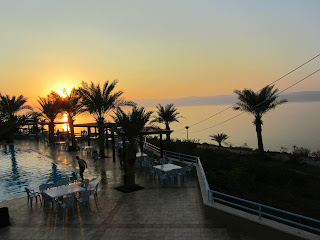 I was less hesitant about doing this in Jordan then I would be in Seattle. In the end I just trusted my instinct that it was ok and got back to Amman safely with some interesting conversations along the way. It’s ironic how sometimes you can feel safer and more protected in a place that is completely foreign and unfamiliar then you do in your own home. 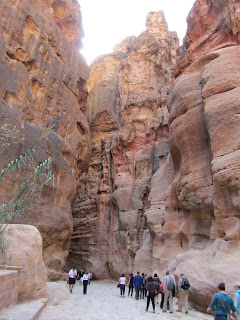 After a few days in Amman, I headed south towards Jordan’s most popular tourist attraction, Petra. A 3-hour taxi ride and a hefty entry fee later (the most expensive site entrance fee in the world) I entered the city of Red Rocks. Petra was established sometime around the 6th century as the capital city of the Nabataeans with the architecture and entire structure of the city carved out of red rocks. 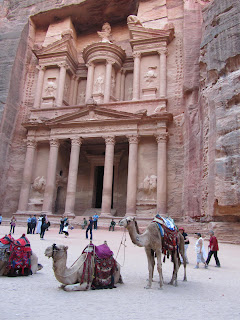 This ancient city, which was only re-discovered about 200 years ago, is perfectly preserved and really feels like you are taking a trip back in time.

Along with the breathtaking beauty and architecture of the site, there is an underlying layer to Petra that is hard to miss. Though Bedouin communities still consider the hills and mountains of Petra their home, tourism has immensely 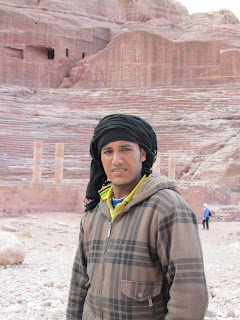 impacted the culture and lifestyle of the local people. Prior to the boom in tourism, the Bedouin communities who inhabited Petra lived off of the land and natural resources of the area. Today, these communities are largely dependent on tourism as their main source of income and have lost much of their traditional lifestyle since their environment has become so highly commercialized. 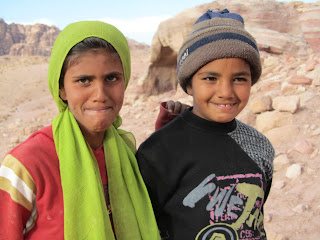 I noticed this not only in the tourist driven environment of the site but also with my interactions with the vendors and local people. I realized once again how even with something such as a historical site, the past has so many implications for the present. 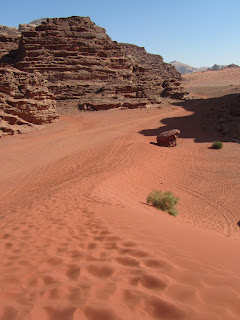 On Thanksgiving Day, I left Petra and I arranged a two day tour to the famous desert of Wadi Rum. With a group of other travelers we explored the beautiful red sand desert on a 4×4 open air jeep. I even got a bit adventurous and climbed a few cliffs and rocks. After our tour, we arrived at our Bedouin camp site and

spent the night there watching the breathtaking sunset, eating a traditional Bedouin meal, stargazing and hearing some live Bedouin music. This year was my first Thanksgiving way from 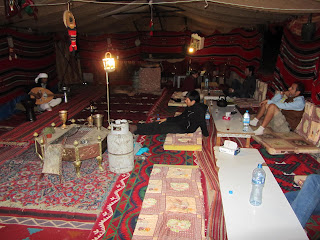 my friends and family and although I anticipated being really homesick, surprisingly I still felt the spirit of thanksgiving sitting on the floor in the tent and eating a meal (chicken which is close enough to turkey) with people I had met only that morning but who no longer felt like strangers. 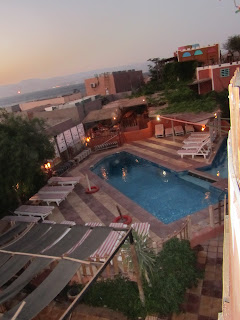 After all of the site seeing, traveling and touring, I was seriously ready for some R&R and thankfully…that is exactly what I got. I coincidentally landed at this hostel that was like a slice of heaven on earth. A family run place right across from the beach with a beautiful pool, tropical décor, and tons of nooks and 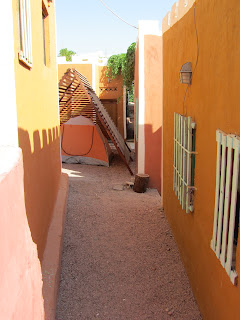 crannies to just chill out and relax. I went snorkeling in the Red Sea and right off the shore saw amazing coral reefs as well as some of the most colorful, bright, diverse fish I have seen in my entire life. I spent two days longer there than planned because I just could not tear myself away from this lovely hideaway and made a last minute decision to prioritize process over progress 🙂

In addition to the amazing sites, natural beauty and warmth of Jordan’s people, the most incredible part of my travels in 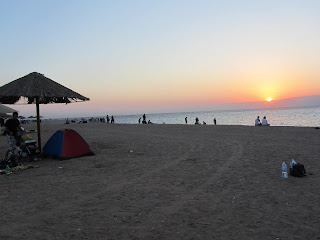 this country is I was truly by myself the entire time and finally felt the essence of independent travel. I noticed a confidence building inside of me that was not there before which is due largely in part to the feeling of empowerment I gained through managing things and navigating decisions completely on my own. I had many moments that I felt extremely vulnerable and alone especially in the Middle East when I was constantly asked, “So it’s just you?” However, this very feeling of vulnerability made me realize why independent travel is 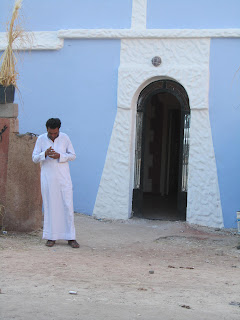 such an essential part of the fellowship. There is a sense of freedom and openness you have that is so different from traveling with another person or a group. You learn so much about yourself, your capabilities and who you are in the world detached from all the things that define or confine you in everyday life. The world becomes a smaller place and you see that no matter where you are, you have the ability to connect with people and open yourself up to new experiences and that is something no one can take away from you.

6 thoughts on “Riding Solo in Jordan”