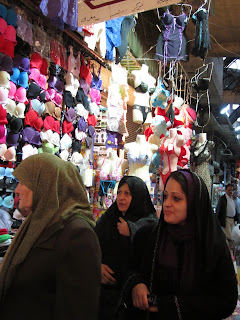 Walking through the souks of Damascus and Aleppo, it is common to see women fully covered from head to toe, rarely working outside of the home and usually with a man.  At first glance, it is easy to assume these women are oppressed. Digging deeper you see clearly there is more to the story.

One of the things that is very common to see in the souks of Syria are these risqué lingerie stores with a range of options visibly displayed in the windows. Items which in the US would only be accessible in particular stores and would never be on display in a public setting. This really puzzled me as it was so contradictory to see something so sexually liberal in such a conservative society. I would watch as veiled women walked into the shops and purchased pieces of lingerie in the same way they would their fruits and vegetables in the market. 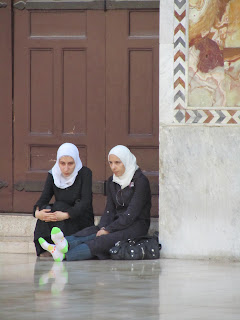 This phenomenon intrigued me and I I tried to dig deeper and learn more about the status of women in Arab countries, how they think and what their daily lives are like however, I realized my contact with women here is almost nonexistent. All of my interactions have been with men: men are the taxi drivers, men are the vendors in the souks, men work in the hotels and restaurants, men ride public transportation. This is not to say that women don’t also do these things as well, but as a tourist, gaining access to women in this society has been very hard as they cross your path only occasionally making it difficult to forge a relationship under these circumstances.

One afternoon in Damascus, I decided to go to the hamman (traditional Turkish bath) to relax and unwind for a few hours. Unfamiliar with the rules, I carefully entered the steamy dome like bath, trying to emulate the other women while waiting for my scrub, sure that my foreignness was strikingly obvious. To my surprise, it wasn’t; women started speaking to me in Arabic and when I gave them a blank look 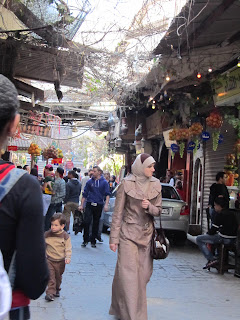 and said, “I don’t speak Arabic,” I expected them to turn away as they usually do in the souks or bus stations. Instead, their interest was sparked and they started talking with me, asking me about my life, where I am from and what I am doing in Syria. In a space where we were stripped of everything (literally) the walls between us came down and the artificial barriers that existed on the outside world seemed irrelevant. While getting my scrub from the overweight women (who scrubbed my skin until it was raw) a young girl shared with me about her struggles in school, being in a long distance relationship with her boyfriend and the complicated dynamics in her family. After, I joined three generations of women who come to the hamman together every weekend, bring their lunch and spend the whole day there. Through our conversations and simply just sitting next to one another, we simultaneously realized our lives are not that different.

After my scrub, the young girl and I sat together in the lobby and drank our tea. We chatted a bit about casual things (comparing tourist and local entry prices) and then got dressed.  I watched as she put on her very fashionable skinny jeans, revealing trendy top and finally spent 30 minutes carefully applying her make-up making sure every eyelash and eyebrow is meticulously in place. 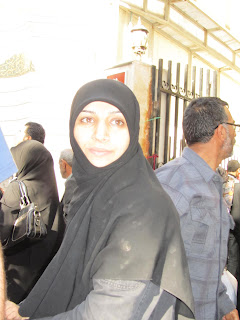 As I stood beside her getting dressed, fixing my hair, and putting on my make-up, very little differentiated us from each other.  After completing our beautification process, I put on my shoes as she draped her body in a long black cloak and covered her head with her black scarf. We left the hamman and went in two separate directions as our commonalities faded away and our differences rapidly resurfaced.

I think often as westerners we have a standard of what it means to be free or equal and judge the rest of the world based on that. Spending a day in a hamman certainly didn’t reveal everything about the status of women in the Middle East but it taught me that we are not as different as we perceive ourselves to be. You really never know what is behind the curtain until it is unveiled.

7 thoughts on “Lipstick, Lingerie and Hijabs”