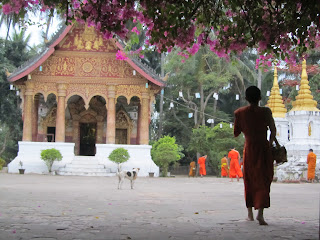 After about a month in Thailand, and a visa expiration date fast approaching, I knew I needed to move on to my next destination.  Since Southeast Asia was not initially on my itinerary I didn’t have a plan of where I would go to next. Witnessing my indecisiveness a friend of mine came to my rescue and said, “You need to come to Laos. You will love it.”

The next day, I arrived in the quaint town of Luang Prabang; a subtle mix of French sophistication and Southeast Asian charm. 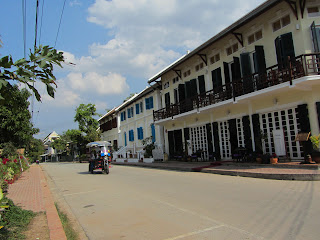 In the mornings I would rise before dawn to participate in the Giving of the Arms, a daily ceremony offering bananas and sticky rice to the hundreds of orange-robed monks parading through the streets before beginning their day of spiritual devotion. My days consisted of visiting temples and breaking for a cup of Lao coffee in the small outdoor restaurants that line the Mekong River. 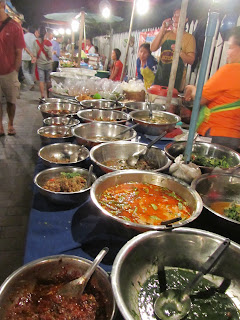 In the evenings, I leisurely strolled through the colorful night markets trying to resist from buying all the unique handicrafts made by local Hmong villagers and savored the local food where $1 bought you an unlimited helping of curry, rice, noodles, and papaya salad.

A highlight of my time in Luang Prabang was my visit to the waterfalls: a series of crystal white streams of water gracefully cascading down to form small tropical blue pools at the bottom, perfect for taking a dip in. On the way back from the waterfalls we made a stop at an indigenous Hmong 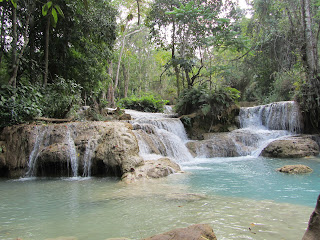 village. I noticed a row of young Hmong girls sitting on the ground selling bracelets and repeating in a sing-song voice, “one thousand kip for me.” They said it over and over again to every tourist that walked by, persuasively coercing each one into giving the girls money.

Conflicted, I bought a bracelet from each girl wondering if I was doing more harm than good.  I thought about the implications of traveling the world as a western tourist and how by default, I am participating in a dynamic that creates dependency and disrupts cultures all around the world. 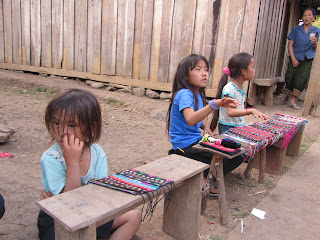 Though the experience of visiting a village is so much richer than seeing waterfalls and temples, my benefit clearly causes drawbacks for the local people. Entering their world, handing out money to their children in exchange for a photograph, and interfering with their lifestyle which previously consisted of subsistence farming and collective participation are just a few ways. With the rise in tourism, competition among the local people has escalated wearing down the strong communal bonds and promoting a more individualistic approach to life. Hmong communities have become more dependent on the cash business that tourist bring in as opposed to their traditional methods of livelihood; another way in which globalization continues to disenfranchise the most vulnerable people. 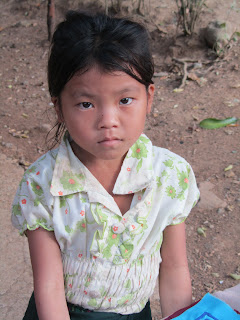 background about their tumultuous history and how despite this, they have managed to retain their unique culture, religion, language, and traditions. The Hmong people have never had their own homeland but inhabit the mountains of several Southeast Asian countries. During the Vietnam War, although Laos was declared a ‘neutral zone’ by the UN, the U.S. secretly entered Laos and capitalized on the Hmong people’s isolation and opposition of the communist government, training them as undercover fighters and informants.  The fallout, other than the 15,000 deaths caused, was that after the ‘secret war’ ended many of the Hmong who were trained by the CIA were later suppressed, brutalized and killed by the local communist government, with little help or 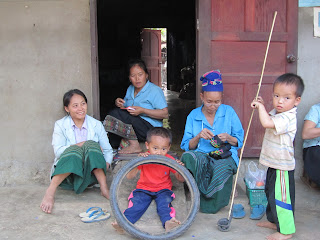 intervention from the US.  Many of them fled to neighboring countries living in exile. Clearly, the exploitation caused by infiltration of the west, whether government or tourism, is not a new theme in the lives of the Hmong people.

After visiting the Hmong village my interest in the politics of Laos was sparked and I realized I knew nothing about the current government. I visited some ex-pat friends of mine living in Luang Prabang and over a glass of wine at their glorified treehouse home overlooking the Mekong River, they told me a bit about the context of the country. 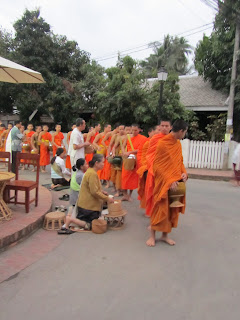 In 1975 Laos was declared a communist nation and this government continues to rule until today. This information shocked me as after 2 days in the country I was completely unaware of the communist regime. I am not sure what I expected would have given this away: soldiers marching the streets, red flags, people being arrested etc. Though the country does allow private enterprise and little would reveal that Laos is in fact communist, there are things that confirm its existence as a red nation: Buddhism is kept at bay, indivi 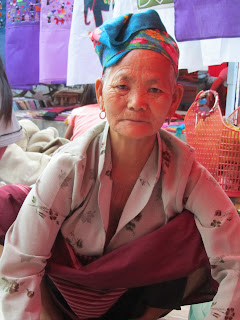 duality is discouraged, property can be revoked at any moment, there is only one legal political party which is the one in power and most things are monitored, run and regulated by the federal government.

Thinking about the dual impacts of communism and tourism, I left Luang Prabang for the crazy ‘tubing’ party town of Vang Vieng. From the back of a bumpy mini-van I peered out the window to see the countryside, the quintessential picture of Southeast Asia: lush, green and tropical with seas of local women harvesting the abundant rice fields. When I finally arrived in the town, I felt like I had entered another world. 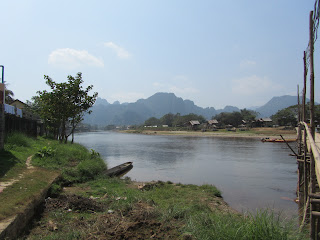 Vang Vieng is a cross between a water park and a frat party where psychedelic pizzas are openly sold, Friends and Family Guy are constantly playing in the local bars, and drunk backpackers in their early 20’s tube down the famous river with a Lao beer in one hand and their waterproof cameras in the other, swinging from unreliable ropes then tossing themselves invincibly into the rocky river. Though I tried to embrace this ‘party’ scene I couldn’t help but think, “What happened to the local people who use to live here?” “Who is benefitting from this new backpacking tourist industry?” “What do Lao people think about crazy morally stumped westerners?”

As my time in Laos progressed I was starting to feel aimless and confused about my purpose in this part of the world.

Though initially I longed to just be a tourist, I began to resent this role fully aware that there was no escaping it. I felt disconnected from the other holiday backpackers yet found it difficult to break the barriers between myself and the Lao locals.  Feeling lost and isolated made me miss home and familiarity. I called my sister and she said, “Maybe this is a part of your experience. This trip is not only about having an aim but is in fact the opposite to wander and wonder. To not know what your purpose is and to see that as a path to figuring it out.” 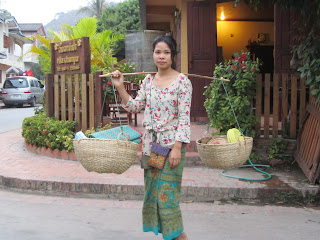 The funny thing is, it was not until I wrote this blog that I actually realized how much I learned and gained while I was in Laos. Though I came to Southeast Asia to shut off and just be a ‘normal’ backpacker, Laos forced me to think critically about the footprint I am leaving as a tourist and most importantly, how our actions have a rippling effect around the world, even when we fail to recognize it.

My first Chameleon spotting in Laos. It really does change color!

1 thought on “Laos: Tourism and Communism”