Ethiopia: A World of Inspiration 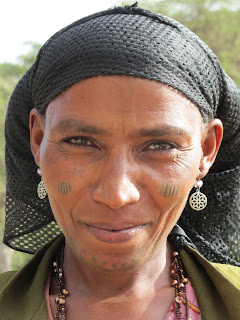 During the 5 years I worked as a case manager in Seattle, I formed a strong bond with so many East African families. These families allowed me into their world as they shared their stories of escaping oppressive regimes to come to the US in hopes of a better life. When I was writing my Bonderman essay and thinking about why I want to travel the world, these families were the first thing that came to mind. I wanted to go to East Africa to experience their culture first-hand, learn about their history and feel the same warmth I felt when I was around them.

The moment my plane landed in Ethiopia, all of my clients’ stories came flooding back to me.  One in particular stood out.

Zufan came to me after a year of being homeless. When she walked into my office, though I could sense the burden she carried around with her, I felt the room light up with positive energy. Her son Dawit was one of the happiest kids I have ever met. As I interviewed Zufan he joyfully bounced off the walls and played with the toys in my office. 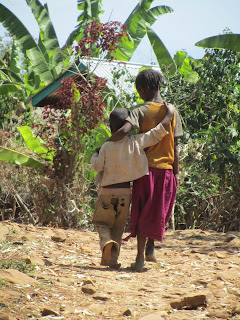 At the young age of 19 Zufan had already been through so much in her life. At 16, her father was in-jailed by the Ethiopian government for opposing the tyrannical ruling party. Fearing for their lives, her family was forced to escape the country. On foot, herself, her mother, and her 5 younger brothers and sisters left their home and headed for Sudan. As they were approaching the border, the strain was too much for Zufan’s mother to take and she died tragically. When Zufan told me this story, her voice became heavy as she explained that she had no choice but to leave her mother’s body behind and continue on towards the border. For a few moments, that brightness in Zufan’s face that was always present disappeared. She continued on to tell me how she became responsible for her 5 brothers and sisters. She safely got them to a refugee camp in Sudan where they lived together for several years. When Zufan gave birth to her son, she knew she couldn’t raise him in the camp. 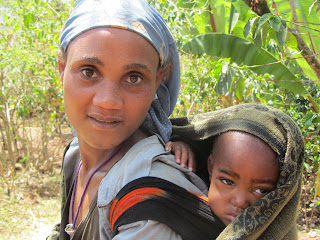 She worked in Sudan until she made enough money to pay a coyote to help her escape to the US. She was flown to Mexico and then was pushed in a floatation device across a river with her 6 month old baby on her chest until she crossed the border into Texas. In Texas she was held in custody by INS and declared that she was seeking asylum. With a contact in Portland and $200 in her back pocket, after several weeks, Zufan and Dawit were released from INS detention and made the long bus journey to Seattle.

The thing that always surprised me about Zufan is that even with all the hardships that stood in her way, she was full of hope. She had not spoken with her brothers and sisters in over a year and everything that she had ever known and loved had been torn away from her yet she took joy in the smallest things like spending time with her son, learning English and volunteering at a food bank. 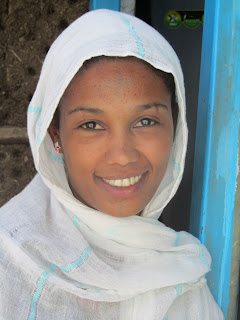 Over the 2 years I worked with Zufan I couldn’t help but feel inspired and filled with energy and exuberance every time I was around her. I felt like I could take on anything if I even had one tenth of the willpower that she had. That there is no obstacle that cannot be overcome.

Zufan’s spirit and experiences along with all my other client’s stories are what brought me to Ethiopia, but what lied ahead of me I could never imagine. Ethiopia captivated me in a way that is hard to describe. I reached the highest of highs, lowest of lows, and everything in between in this country.

Ethiopians or the Habesha are a proud people and as one of the only countries in Africa that has successfully resisted colonization, they have retained so much of their original culture and lifestyle. This includes their own calendar (13 months instead of 12 and the year is 2003), time (10:00 am is 4:00 in Ethiopian time), holidays (fasting lasts all of lent), religion (majority Christian Orthodox), physical appearance (a mix between African, Arabic and Indian), music (it’s amazing-you just have to hear it), alphabet (one of the oldest written languages) and of course languages. I encountered some of the warmest, kindest people I have ever met and had so many moments I will never forget. Just to give you an idea, here are a few memories I noted in my journal: 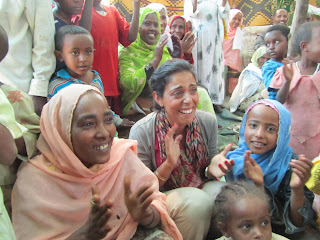 Walking through a small rural village and being invited into a tiny hut to partake in a traditional wedding celebration while men prepared the newly slaughtered cow. Clapping and singing along with make shift drums as I watched the family rejoice in the celebration and the excitement of having a foreigner in their home. Of course, they would not let me go until I stood up and did some traditional Habesha (Ethiopian) dancing. 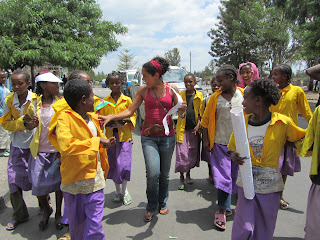 Waiting on the street corner and suddenly joining a crowd of marching kids. Letting go of all my inhibitions: chanting, jumping, singing and dancing in the streets with them. Feeling an energy and spirit that we often have to tuck away rise to the surface. 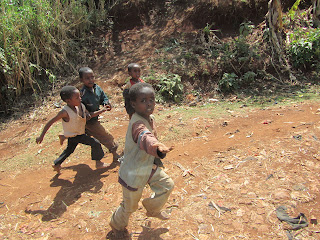 Driving through the beautiful rural countryside and looking out of the side window to see the lush, green landscape while women carry buckets of water on their heads and their babies on their backs and young boys herd a crowd of goats.  Watching as the kids chase after us screaming, 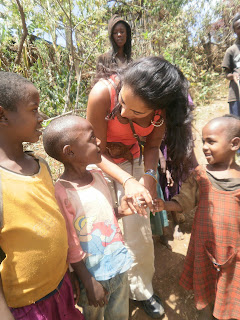 Entering a village and seeing all the people run out of their homes to greet you and walk with you while the kids fight over who gets to hold your hand.

Eating some of the best food I have ever had 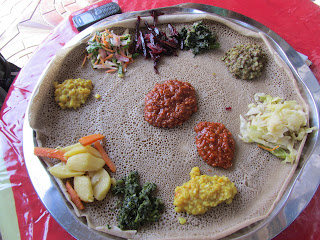 with creamy espresso macchiatos, sour injera bread that we eat with our hands along with the shira (mashed chickpeas and beans), tibs (chicken or lamb marinated in rosemary), and fresh mango, pineapple, avocado juice.

Participating in a traditional Ethiopian coffee ceremony in the Kaffa region 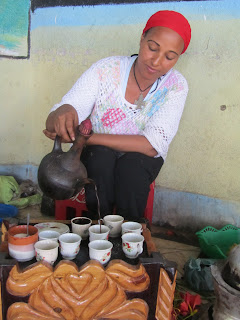 (coffee’s namesake and one of the biggest producers of coffee beans) while a beautiful Habesha woman roasts the green coffee beans, grinds them and prepares the most amazing, pure cup of coffee with such elegance and grace.

Stopping in the streets to talk to people who just want to walk with you, ask you were you are from, practice their English or welcome you to their country. Feeling the genuine meaning of life and what it means to live in the moment, be a part of a community, feel that you are a part of something bigger then yourself. 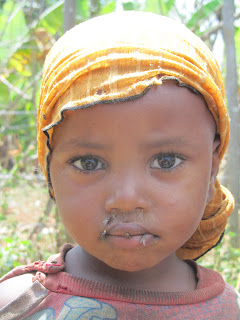 Of course, not every moment was filled with joy and excitement. In Ethiopia, the level of poverty was truly gut-wrenching and I would say among the worst I have seen. The government has no infrastructure to deal with the poverty and the streets of Addis are filled with sick adults, begging children, and starving elders. Not a minute passed that someone didn’t ask me for money, food, or anything I was willing to give them. Child labor is rampant and people are jsut REALLY poor.

Visiting a catholic charity situated in the center of Addis really substantiated the poverty I experienced in Ethiopia. As I entered the compound, the first thing I noticed was the sign by the entrance that read “Catholic Missionaries for the sick, dying and destitute.” That sentence said it all. 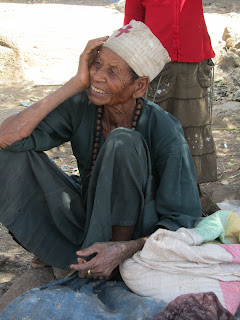 When I entered the compound the stench of illness and highly compact bodies hit me in the face. As I toured the compound I visited each cement room that was filled with cots just inches from each other and housed hundreds of people who were getting minimal care and just waiting to die. Cancer patients, those inflicted with AIDS, TB, malaria, and other diseases. Untrained nurses taking blood samples without gloves and moving on to the next patient.  People who were malnourished and starving, poor mothers with new born babies and disabled orphans left by their parents due to their economic inability to take care of them. Human suffering in the raw. 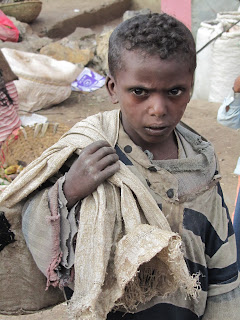 Yet the suffering in Ethiopia does not only stem from poverty. As I was traveling the country, so many people shared their stories with me that coincided with Zufan’s life. Squished next to a young girl in the back of a minibus (the form of public transport in Ethiopia) she told me she has lived in the US for 10 years. When I asked her why she came to America she explained that both her mother and father were killed in one day by the prior Ethiopian government due to their opposition of the regime.  She and her brother, afraid for their lives, escaped the country and it’s only been recently that they have been able to return to their homeland, like many others in the Ethiopian diaspora. 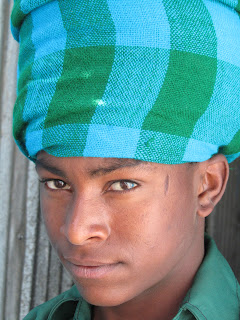 While sitting at a coffee shop I spoke to a young Eritrean boy. Surprised that he was even granted admission into the country due to the separation and the continued inability to bridge the tragic divide between Ethiopia and Eritrea, he explained that when he was born in the 80’s, Ethiopia and Eritrea were still one nation. His parents separated when he was a child and his mother moved to be with her family in Bahar Dar (a city in Northern Ethiopia) while he stayed with his father in Eritrea. Soon after, the two countries split off and a superficial but very significant border separated him from his mother throughout his entire childhood. Similar to the conflict in Israel and Palestine, people from both sides are unable to cross the border which has caused many families and friends to be separated for years. A country, culture and people who used to be one, now divided due to political differences. A few days ago was the first time this boy had seen his mother in 14 years. When I asked him how it felt he said, “We 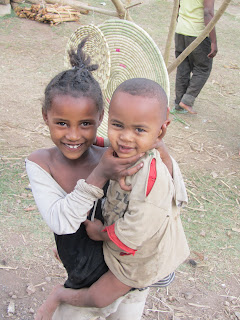 both just fell to our knees and cried.”

These along with the many other stories I heard while traveling the country left a imprint on my life. Between the good and the bad, the rich and the poor, Ethiopia changed how I see the world. Like Zufan, I found joy and hope in all the unexpected moments from the most extreme heartbreaking poverty to the simple, amazing, beautiful moments that just make you feel alive and vibrant; I couldn’t help but be moved by this country.  In Ethiopia, I found the same inspiration that I saw in Zufan that very first day she walked into my office-an inspiration I realized has given me the strength to take on the world.

3 thoughts on “Ethiopia: A World of Inspiration”