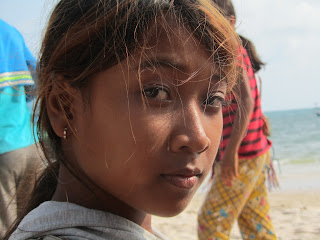 In the third grade my best friend was Chaunty Thook. Assigned seats right next to each other, we instantly became friends and felt a common bond: we were both brown in a predominately white school, spoke a different language, and loved Paula Abdul. We would often bring snacks from home that the other kids thought were weird and share them with each other. I still remember the taste of the dry uncooked Asian noodles we would shake with the MSG seasoning and eat like a bag of chips. Though we didn’t fully understand this at the time, what we shared the most was our experience as first-generation Americans.

I visited Chaunty’s home in the public housing complex across from our elementary school. He mother was a tailor and her father took any job he could get. They worked hard to provide for their family but  being from the suburbs of Eastside Seattle, Chaunty never really could keep up with the rest of us economically. She was always struggling to buy gifts for birthday parties or attend class field trips. When I met her parents I remember thinking 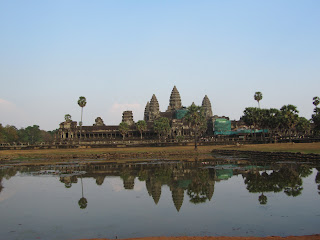 that although they were so much younger than my parents, their faces looked old, weak, worn-out, and tired. Though I felt a commonality with Chaunty, I also  felt a deeper pain and hardship in her immigrant experience as compared to the privileges I was afforded.

It wasn’t until college when I learned about the war in Cambodia that I began to understand Chaunty’s story. Her parents, like many others in Cambodia, were victims of the Khmer Rouge regime and came to the US as refugees with nothing more than the clothes on their back, in hopes of a better life for their children.

My friendship with Chaunty, social justice classes, and work with Cambodian refugees in Seatle, sparked an interest in visiting Cambodia that I  was last-minute able to incorporate into my Bonderman experience. While in Cambodia, I spent a week lounging at the beach, did some Korean line dancing in the center of Phnom Penh and visited the ancient temples of Anchor Wat. Most importantly, 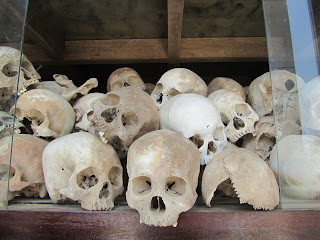 I got a closer look at the genocide that ravaged the country.

On a sunny clear day in Phnom Penh, I hired a driver to take me around to some of the different genocide memorial sites. Having limited time, he parked the motorcycle-drawn carriage in front of the Killing Fields and gave me an hour to visit the site.

I walked into the memorial and the first thing I saw was a tall glass bookcase filled to the ceiling with thousands of human skulls.  My eyes filled with tears at the site of this and suddenly, I felt a hand grip my forearm. I saw an old Khmer woman looking me in the face.  She stood there for a few 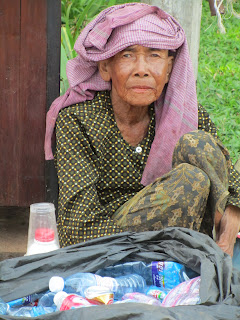 moments with my arm in her hand and her eyes locked intensely but gently on mine. She didn’t say a word but I could feel her reaching out and offering herself to me in that moment. I was so touched yet felt guilty for taking solace in her comfort when I was far from the victim.

I went through the memorial feeling almost numb. The tragedy is just too horrible to comprehend. There is an urge to tell yourself that this didn’t really happen because human beings are not capable of inflicting this much pain upon each other.  I had to sit down and just let it all sink in. 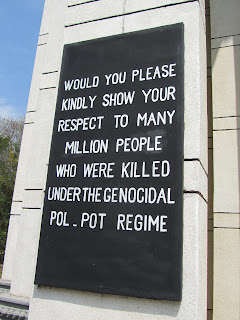 In 1975, the Khmer Rouge, a communist driven government lead by Pol Pot, took over Cambodia, “implementing one of the most radical and brutal restructurings of a society the world has ever seen.” They had a vision to turn Cambodia into a peasant dominated, rice growing economy and weed out anyone who didn’t fit the new vision of the country: urban dwellers,  intellectuals, professionals, Chinese, religious leaders, Buddhist monks, those who wore glasses or spoke a foreign language etc. In short, no one was spared and everyone was at risk.

At least 3 million people were murdered or died at the hands of the Khmer Rouge during the 4 years they were in power, constituting almost a third of Cambodia’s 7 million population. People were dislocated from their homes and separated from their families to join slave labor camps where they were forced to work and then killed, tortured or died of starvation and disease. 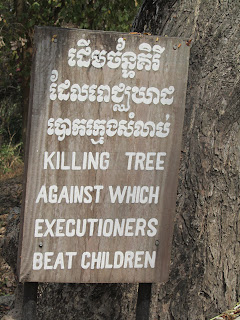 As  I continued through the Killing Fields, I saw the trees that were used to beat and kill young children. The mass graves where humans were thrown after they were massacred in the fields, the bones of which are still being excavated. The tools that were used to carry out the killings and videos documenting how a tragedy of this scale was executed.

2.5 hours later I emerged from the memorial looking drained and a bit guilty about my tardiness. I looked at the driver and said, “I know, but this is more important than visiting temples or other sites. I needed to see this.” He emphatically agreed and then told me his story.

He was only 4 years old when the Khmer Rouge invaded Phnom Penh. Though they all rejoiced in 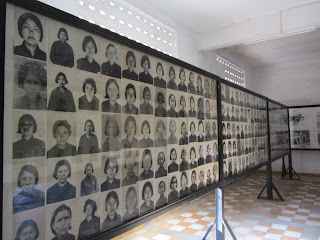 happiness in the beginning, within a matter of hours their lives were changed forever. His father, a nurse in the local hospital, was taken away and murdered by the Khmer Rouge due to his education level  and perceived connection to the west. His mother escaped with him and his sister, hiding in the jungles of Cambodia for 3 years until 1979 when the Khmer Rouge were defeated by the Vietnamese army. Though they suffered from starvation, disease, and trauma, somehow they made it. 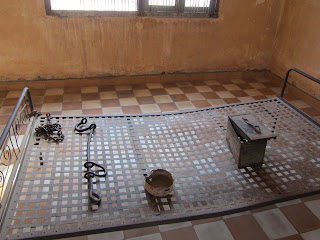 We headed to S-21, a school that was converted into a torture chamber during the Khmer Rouge period. This time I hired a guide for a measly $5 (revealing the desperate economic conditions of the country). The guide toured me through the school, very dryly explaining the context behind each place: “Chemicals were poured on people here and then they were set on fire.” “Men were hung by their legs from what use to be a  gymnastic bar and suffocated in a bucket of feces.” “Here the families of the prisoners were locked away without food or water.” The humiliation, pain, and tragedy were again  uncomprehendable. 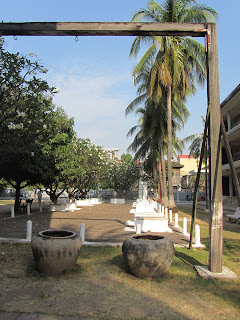 My guide appeared detached and aloof, like she was reading a script in each room we passed through but I  could see the hurt in her eyes. As we were completing the tour I thanked her and asked if she had any children to lighten the mood. She told me she did and was struggling to raise and support them, working several different jobs. I expressed how much I admire her and understand that it must be so difficult to relive this horrible tragedy every single day. She nodded her head.

Then she showed me her lower leg which was deeply scarred, almost like a chunk of her flesh was missing. She explained: 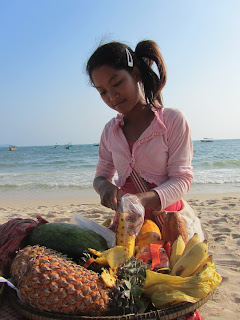 “I was 13 when the Khmer Rouge came into power. I was taken away from my family and forced to work day and night like a slave in the rice fields. I did this for 3 years and one day a soldier put a gun to my head and said I wasn’t working efficiently enough. My leg was infected and I was really sick. As he was about to shoot me he looked at my leg and said, ‘You will die tomorrow anyway. I won’t waste the bullet.’ He left me there to die, but somehow…I survived. When the war ended I went searching for the rest of my family and found out they were all dead. At 16 I was alone, poor and had lost everything. Sometimes I wonder if I would have been better off dying. 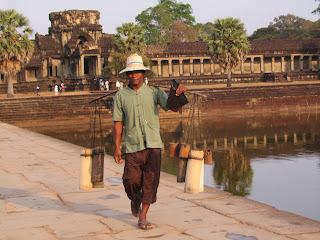 I can never forget what I went through. Even now, I can’t sleep through the night. Every time I close my eyes I see the same horrors. There is no escaping the damage that was done to me. I will live with it for the rest of my life.”

As I traveled the country, I continued to see the deep scars the Khmer Rouge left behind. Orphaned women sold into prostitution, adults with missing limbs from the hundreds of land mines, government corruption, child labor, HIV/AIDs epidemic, land-grabs and eviction of families 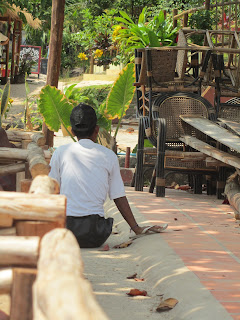 from valuable land, extreme desperate poverty, nation-wide famines, and  disparity between the rich and the poor at an all-time high. Little responsibility has been taken by the international community about turning a blind eye to the genocide and even less has been done to rebuild the country. In fact, the Khmer Rouge occupied the Cambodian UN seat until the 90’s and to date, only one suspect has been tried for crimes of genocide.   Instead the Khmer Rouge leaders continue to live peacefully in the mountainous regions of the country. 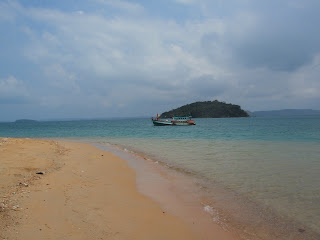 Though the genocide is such a huge part of Cambodia’s history, it is by far the only thing that defines the country. The landscape is beautiful and lush with everything from golden beaches to dense mangrove jungles. Khmer people are among the friendliest and warmest people I have ever met. Regardless of how much they have been through, they let me into their lives in countless ways and their kindness radiated through every level of my experience: slurping a cup of noodle soup across from an old 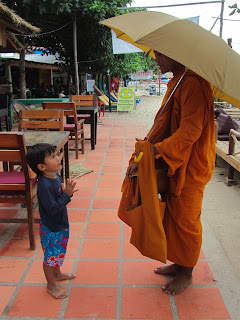 toothless man practicing his English with me, children on the beach begging for money but settling for playing with my hair, and the family guesthouse owners who safely kept my misplaced passport and wallet until I came to retrieve it in a panic. Maybe it’s the impact of Buddhism that gives the Khmer people the strength to accept the pain they have endured or maybe it is just their resilience as a people…whatever it is, Cambodians are survivors.

Though my time was very short, I left Cambodia treasuring all of these moments, remembering those who lost so much to this war including my driver, guide, and childhood friend Chaunty, and most of all thankful for finally finding my purpose in this region of the world.

**If you are interested in learning more about the Khmer Rouge and Cambodia some good books include: First They Killed My Father by Luong Ung and When Broken Glass Floats by Chanrithy Him

3 thoughts on “Cambodia: A Deeper Look”