Byblos: A Jewel of the Mediterranean 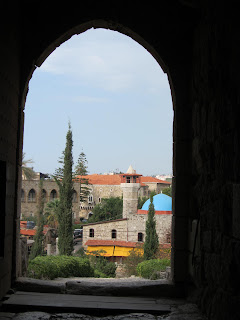 Since my last post was a bit politically heavy I want to share briefly about some of the sites I have visited around Lebanon. The beauty of Lebanon as a country is it is small and has really accessible transportation so it is possible to visit every region within a week’s time span. Also, its landscape is so beautiful and diverse and within the country can virtually have every type of experience including the beach, mountains, valleys, castles, ruins, small villages and busy cities. 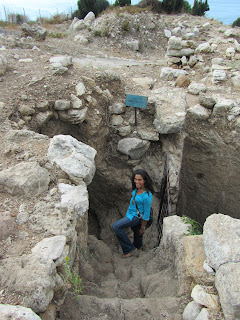 A few days ago I visited the small fishing-town of Byblos, situation on the Mediterranean Sea  and one of the most charming places I have visited. At first glance, Byblos feels like a combination between a Greek island and an old medieval town with beautiful roman architecture, fishing boats idle on the shore, a castle built in the Mediterranean ocean and the fresh scent of jasmine and roses in the air. The town is over 7000 years old and is also home to an amazing archeological site that was inhabited by 17 civilizations. Myself and a few friends I ran into while n the town visited the ruins and due to my limited knowledge of history and archeology, hired a guide to explain the site and historical background. 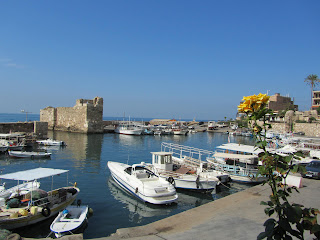 Being in the Middle East, I wish I had a better understanding of ancient history and archeology because I think if I knew more, these sites would be so much more fascinating. Although I enjoy them, it doesn’t have the same impact as for those who have a context in which to place them in.  However, I have also realized I am not the typical tourist and don’t get as much satisfaction out of tourist sites as I do out of other things such as observing and really going into depth in a culture.  The great thing about traveling on your own is you are not obligated to do anything you don’t want to do and you don’t have to justify your decisions to anyone. There is a sense of freedom and openness to life that is so unique. If I would rather sit at a coffee shop all day long, write in my journal and people watch, then I can. It’s just a matter of recognizing what really makes me happy and fits the type of experience I want to have.

In the end, although I did visit the ruins, I also went down to the seaside and just sat along the M 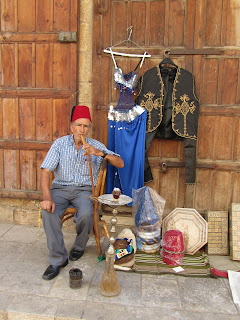 editerranean for a few hours which was totally empty other than a few fishermen in the distance. I have grown to really love and cherish my time alone. Although I love people and interactions, being alone gives me time to think, process and realize what I am experiencing… Also, it is empowering to feel that I can be happy on my own and have a good day without anyone else. The hard part about traveling as a woman though is that although I am fine being on my own, sometimes things are not as accessible or safe when you are by yourself and you definitely open yourself up to more looks and questions (I often wear a fake wedding ring just to avoid the questions around why I’m not married). Even in the safest of places (and the Middle East feels EXTREMELY Safe in this sense) I still feel vulnerable in a way that a man is not when they are traveling on their own. It is interesting because during the time I have been here I have met plenty of male solo travelers but very few women and I often am the only woman in the entire hostel. 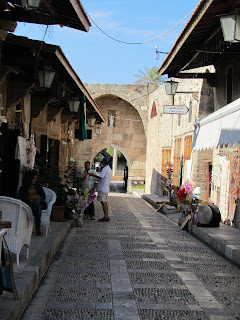 After leaving Byblos, I joined two Australian travelers, one who is of Lebanese descent, to his hometown in Tripoli which is a predominantly Sunni Muslim port city north of Beirut. Again, this presented a totally different side to Lebanon for me and was even a huge contrast compared to the Hezbollah controlled areas. The city had the hustle and bustle of a typical Middle Eastern city and even the new area of the city looked pretty old compared to Beirut. Apparently this is also an area with its own set of tensions with bombings and civil war between the Sunni Muslims and the Alawites, a particular sect of the Shiite Muslims. We stopped by my friend’s house in Tripoli which was interesting to be in an actual place of residence and then walked around the streets, had dinner and sat in a traditional hookah bar. The unfortunate part of this evening is I got a horrible case of food poisoning and was really sick for two days. There is nothing like a good bout of food poisoning to make you feel really home sick and like you want to give up on this whole traveling thing but I guess these are also the times when you have to just hang in there and keep things in perspective.

1 thought on “Byblos: A Jewel of the Mediterranean”