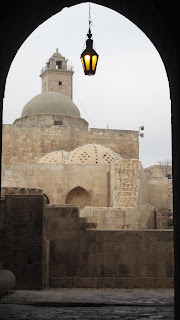 Staying in Damascus several days longer than I anticipated, I was finally able to tear myself away from this city and move on to Aleppo, the second largest city in the north of Syria. I contacted a girl through a website called Couchsurfing in which people can create a profile and open their home to travelers and she quickly accepted my ‘couchsurfing’ request. After a 5 hour very luxurious VIP bus ride, we arrived in Aleppo. We got off the bus and into a taxi headed towards the girls home and suddenly my friend and I both realized we left the sweets we had bought as a gift for the family on the bus. The taxi driver quickly turned around, returned to the bus station and explained the situation to the local police officer. The police jumped in the taxi with us and the two of them (the police and taxi driver) strategized on how to retrieve our box while my friend and I quietly sat in the back seat. I turned to her and said, “Can you imagine a police officer in the US driving around to locate a box of cookies?” After about 30 minutes of phone calls and driving back and forth, we finally located the box and when we opened it to offer everyone some sweets, the police officer looked at us thinking, “You made me do all this for a box of cookies?” Of course he was gracious and didn’t make us feel bad but as he got out of the car he said in perfect English, “Miss, please be more careful with your belongings.”

We finally arrived at the family’s house around dusk, hauled our luggage up 5 flights of stairs and entered their small two-bedroom apartment. We sat down and the family fed us a wonderful dinner as we learned more about each other. The family of five (mother, father and three girls ages 20, 19 and 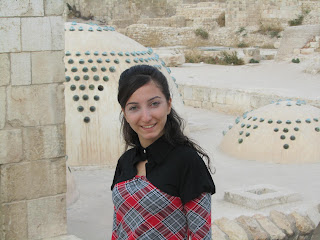 14) are largely defined by their  Armenian cultural background. Several generations ago, their family fled Armenia due to ethnically motivated killings by the Turkish (with help from the Germans) which tragically resulted in the Armenian  genocide,  instigating a forced diaspora throughout the Middle East. The girls’ mother was born and grew up in Lebanon and then was forced to flee there as well after her brother and cousins were killed in the Lebanese civil war. Their parents met in a bomb shelter in Beirut while they were hiding out from the war and then escaped together to Syria where the three girls were born and raised.

After a good night’s sleep on the couch in the family’s living room, we woke up and attended an Armenian church service. On our stroll through the neighborhood the girls shared with us a bit about the Armenian community (BTW, I have been to more church services in the Middle East then I have 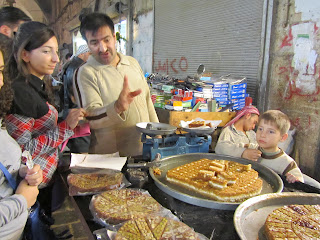 been in my entire life in the U.S.). They explained that Aleppo has one of the largest Armenian populations in Syria and being a very insular community, everyone in the suburb they live in is Armenian.  The community has their own schools, churches and stores and rarely has contact with the rest of Syrian society. In fact, many Armenians don’t even speak Arabic. Learning about the Armenian community, I thought of the many diasporas across the world and how difficult it is for immigrant groups to resist the pressures of assimilation and retain their language, culture, and traditions. It was so interesting to see how the Armenian community has maintained such strong ties to their heritage and identity even though they have been out of their country of origin for over 90 years. 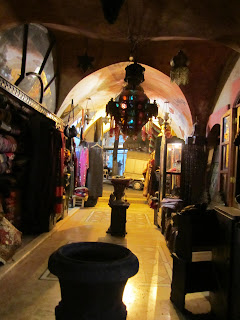 Clearly, this preservation does not happen naturally but is intentional and purposeful. The girls’ parents have developed mechanism in which to ensure their childrens’ roots are deeply planted in the Armenian community. In order to shield them from all the perceived negative influences on the outside, their girls’ father is really strict. They are not allowed out of the house after 8:00 pm and all their whereabouts are monitored. After years of arguing and struggling with their parents for more freedom, the girls said to them, “If you are not letting us out, then we are bringing people in.”

Since that day, the girls have had 98 couchsurfers in their home. Although their father is not totally keen on the idea, he tolerates it because at least the girls are in the home. The biggest issue with Couchsurfing is that it is actually banned in Syria partly because it limits the government’s ability to monitor tourist activity in the country (the secret service has a very strong presence in Syria). When the government discovered the girls were hosting so many foreigners, 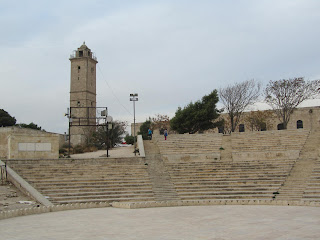 they approached them with a warning about their activity and possible consequences (which is jail time). The girls calmly explained that they are not doing anything wrong and refuse to be cut off from the rest of the world. This seemed like such a huge risk so one day I asked one of the girls why they do this and she told me, “You have the opportunity to travel the world and see and experience things. I don’t have that same opportunity but I still have the desire. Through others’ travels at least I can see the world, hear stories and experience things even if I have to do it from my own couch. It makes me feel like I am traveling with all of you.” I thought about how brave and courageous she is to defy the rules. When I shared this with her she explained, “We really have no other choice. We have to find small ways to expand our world given all the restrictions in our life.” 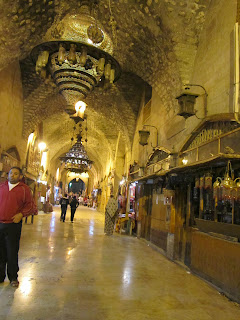 The following day, we visited the old city of Aleppo. On our trip into the city, I noticed the more conservative nature of this city. In Aleppo it is much more common to see women, fully covered with even their faces hidden behind a black scarf.  Soon we entered the old city where everything is centered around the citadel, a preserved ancient city. Being in old Aleppo (Halib in Arabic) I felt an air of mysticism that stems from the thousands of years of history of this city. We paused at a restaurant on the boardwalk that runs along the entire length of the citadel for lunch. After lunch, we went inside the citadel and saw the layout of the old city, the roman theater, old bathhouses and homes.

We then visited the beautiful old souk that was packed with people preparing for the 4-day Eid holiday. Hundreds of sheep were also herded outside for the ritual Eid sacrifice.

Looking around at the modern style cafes lining the edge of the 3000 year old city and the ancient souks, I realized I am standing somewhere where 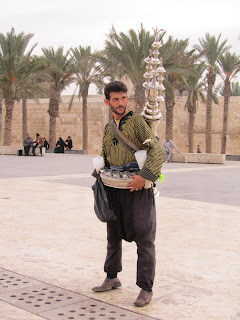 my ancestors possibly lived centuries ago. This awareness has made my experience in the Middle East so powerful. Everywhere I go, a history follows me; not one that is distant or detached but one that is actually relevant to my life and my family today.

After this day, I spent the week in Aleppo not doing much in terms of activities and site seeing but instead gaining insight into life in Syria beyond the superficial layer. I had the unexpected opportunity to live amongst an enclave of Armenian immigrants in a conservative Muslim city and witnessed the reality of their lives day in and day out. I learned so much during this week and the girls truly made me feel like I have a home away from home. The dynamics between the family, chaos, occasional fights and of course the love they all shared reminded me of my own family. Throughout the week we shared so much together including serious 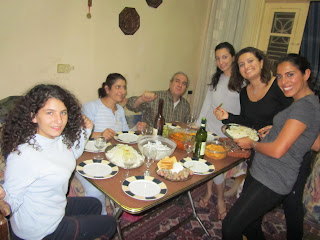 conversations about our lives and families, watching silly movies like Mama Mia, sleeping through an earthquake (which I thought was their cat shaking the bed), cooking a traditional Persian dinner, laughing a lot, and of course, a few beauty sessions. I admire the girls so much because even given their intense restrictions, they have found a way to make connections with 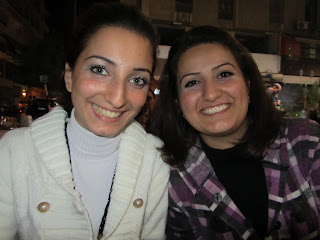 people from all walks of life. Living in a society like Syria, where you never know who you can trust or the implications of your actions I would think would harden you…. cause you to close off. However, for these girls, it has amplified their willingness and openness to relate to people.They are tearing down walls and barriers and are doing it with courage, strength and a tenacity for life.  I now know that no matter where I go, I have 3 adopted Armenian sisters in Syria who are working to build bridges and make the world a better place.