A taxi dropped me off in a narrow, dark street in Sulaymania, a hilltop neighborhood in Amman. I encountered a group of Arab men socializing on the street, looking at me suspiciously. “Sasha?” I said in an inquisitive voice and they all pointed to a small apartment on the first floor of a building.

I entered the home-like office of Collateral Repair, a small grassroots run Iraqi refugee aid organization founded by two Pacific Northwest women. After going to Iraq to protest against US occupation and invasion, they witnessed the devastating impacts of the Iraq war on the people and shifted their focus from protest to action…providing aid for the  millions displaced by this war.

They chose Jordan as their base since the country has absorbed many Iraqi refugees without the means or resources to accommodate them. The country has simply agreed to admit these refugees on a temporary, time-limited basis until the UN Office of Resettlement (UNHRC) can process their resettlement proceedings and move them on to another country. However, the number of refugees forced to flee Iraq are enormous (more than 5 million) and as one might guess, the process is long and complicated. Unfortunately, after many years of waiting, for many families the proceedings have not even begun.

So Iraqi’s in Jordan remain in a holding place, a middle ground, neither here or there. They are barred from employment due to their non-resident status (with serious jail time penalties if caught working), are physically separated from others in their community (they are not housed in refugee camps but scattered throughout the city), often are denied even the basic UNHRC monthly assistance stipend (due to increased restrictions and stipulations on receiving this funding) and although their children (many of whom were born in Jordan) are allowed to attend public schools, their rights are terminated  there. Sadly, the future looks dim for most of these families.

After winding up their nightly adult ESL classes, I sat down with Sasha, co-founder of the organization, and a Iraqi refugee who now works voluntary with Collateral Repair. Over a cup of strong Arabic coffee, they shared with me the histories, losses and stories of the Iraqi people. 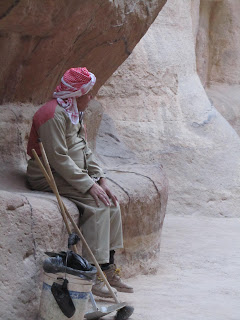 A young Iraqi man, around 40-years old recalled his life in Iraq before the war. “Life was good! My wife got her master’s degree in civil engineering and we both had stable, good jobs and a steady income.” In contrast to many other refugee groups, many Iraqi refugees are from middle and upper class backgrounds and are well-educated and highly skilled. Full of emotion he said, “I was forced to leave my life behind. My home, my belongings, my culture, my history. We lost everything including our dignity which was truly the biggest loss. My kids have no identity, nothing to hold onto or relate to. I have no future. The only thing I can hope for is something better for my children. That is the only reason why I keep going.”

To further complicate things, another barrier Iraqi refugee’s encounter in Jordan is each day they overstay their temporary visas, they are charged $1/day.  The young man I was talking with explained that he is over $20,000 in debt with the Jordanian government as a result of his family of 4 overstaying their visa for over 4 years. However, his options are severely limited. He risks being killed if he is to return home to Iraq. In Jordan, he is banned from working to pay back the debt yet each day that goes by, his debt grows and his opportunities to restart his life declines. A tragic catch-22. 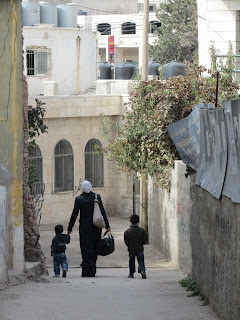 Seeing my shocked reaction to all this information, Sasha told me, “There is not one instance in which I have sat with a family and not felt my heart being torn apart and my eyes stinging with tears. The things I have heard are really so heartbreaking and traumatic that it is hard for any human being to grasp.” Often ravaged my horrible memories and disabled by their past trauma, most Iraqi refugees struggle to do things that at one point were effortless. Simple daily activities such as working, cooking, cleaning, and parenting have now become daunting tasks as they often trigger dreadful memories of war and death. This community has been in survival mode for the last 8 years, missing the chance to process and grieve their losses, which they now carry around with them like a heavy load.

As we talked about what the future holds for this population Sasha explained, “We are really trying to get people to move beyond their trauma and not only be seen for the catastrophes that have stricken their lives but their strengths and resilience as a people as well.”

Though very little hope for the future remains for Iraqi refugees in Jordan, many of them refuse to stay stuck in the past. Although they are haunted by it each day, many are tired of being defined by the war. They are tired of talking about it with no solution, no refuge, and no prospect for a better life.

As Americans we often get stuck on the two-sided debate of this conflict: whether to end the war in Iraq or not. Sitting across from the young Iraqi man and seeing his pain I realized for him and many others, that is a moot point. The damage has already been done yet the question still remains….how do we take responsibility for the millions of people who have been displaced due to our invasion? 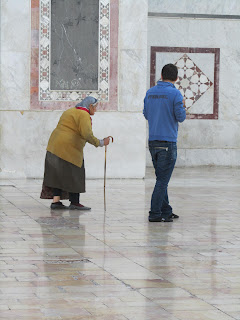 Sasha, who has actually relocated her life to Jordan to live and work among the Iraqi people personally feels this responsibility. I told her how much I admire the work she is doing and how much she has sacrificed. Her response was, “I can’t say it is totally unselfish. I also gain so much out of living here, being part a community, and feeling that I am part of something beyond just myself and my own life.”

Along with her colleagues, she has cultivated this same sense of family within the atmosphere of the organization. Collateral Repair is somewhat of a haven in the mist of suffering for the Iraqi people in Amman. Sitting on the sofa in the office (which is more like a living room) I felt the communal energy of the space. The walls are covered with photos of families, children’s drawings and traditional Iraqi artwork to remind people of home. The young Iraqi man tells me, “I never thought I would be able to trust or be so close with an American but Sasha is just like my sister. Nothing separates us from one another. She is a part of my family.”

The family at Collateral Repair works tirelessly to pull together projects to support the plight of the Iraqi community. These project include ESL classes,  emergency assistance, a women’s craft co-op, a library, support groups for men, children’s playgroups, art classes, and basic advocacy. Collateral Repair reestablishes the sens

e of community that was lost with the fleeing of Iraq and encourages these refugees to not let that little flicker of hope, though it is a very small one, fade away.

To learn more about Iraqi refugees and the work of Collateral Repair or to donate to their efforts please visit their website at: http://collateralrepairproject.blogspot.com/